I was more nervous than usual going into this appoinment because last night was a really rough night.  I only slept about 2 hours.  The babies were going crazy all night long and really haven't stopped much since then.  Even after I got out of bed and tried to eat breakfast this morning I still wasn't feeling well.  I actually had one of my episodes where I got sick immediately after I ate.  Jacob predicts this happens when they are going through a major growth spurt because it seems like a day or two after my sickness I look a lot bigger.  The rate at which my belly has been growing is unreal.  Before I came into the hospital I went and bought some comfy t-shirts to lounge around in while I was here and made sure they were plenty long enough for me to grow into---well, this morning when I got dressed the bottom of my belly was hanging out already!!  It looks like its about time for me to start wearing Jacob's t-shirts and sweatpants!

My cervix really hasn't budged since our last appointment!  Still long and closed!!!  Our goal of 30 weeks might not be unreasonable after all.  I'm feeling like 28 is more realistic though simply because of how heavy and uncomfortable my belly is getting.  The couple from Texas that recently had quintuplets made it to their 27th week so if I could at least beat them I would feel pretty good!

The pictures are not the greatest since I'm trying to use the camera on my computer to take shots from the ultrasound printouts but it'll give you a glimpse.

Giovanni continues to be our biggest baby--or the alpha as Jacob likes to call him!  He is definitely taking advantage of all that extra room he has down at the bottom of the pack to grow.  He was more active than usual as well which was really cute to see.  At one point it looked as though he was trying to push everyone up top off of him.  He had his legs outstretched and pushing against his sisters. 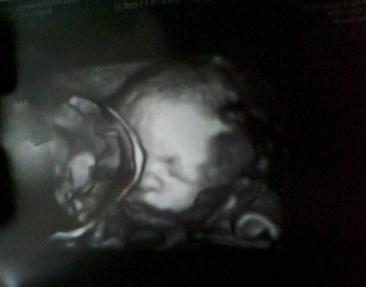 Brooklynn has been getting in on all the action and moving around lately now more than ever before--that or fighting back from Kensley constantly kicking and moving!  The left side of my belly is what gives me the most discomfort.  I can only imagine the fights we will be settling between these two:).

Part of the lining or sac or something--can't remember exactly what they said it was-- was in front of her face but you can kinda see her behind it. 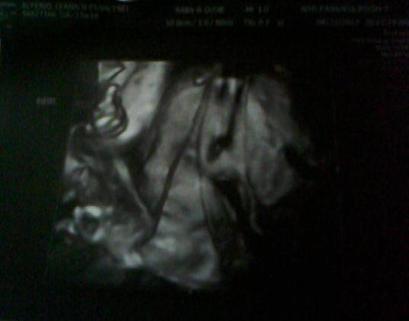 Jade continues to be pretty laid back.  She is definitely more active than Leighton but calm for the most part.  She has actually moved infront of Leighton now so the three girls are still in a row up top but they've pushed the poor boy to the back. 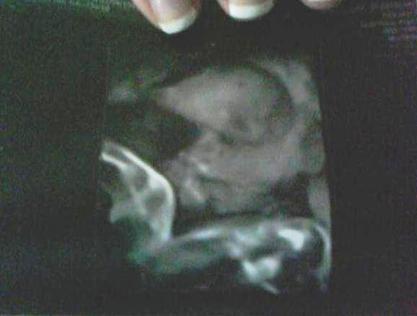 Today the technician nicknamed her the party girl which comes as no surprise to me!  I know I've said it before but she just doesn't stay still....ever!!!  She appeared to be doing yoga today with her legs bent completely over her head one second and outstretched the next.  They also are predicting that she is going to look more like me than Jacob based upon the ultrasound picture.  Its crazy to believe but so many people have told us that their baby actually resembles the 3-D ultrasound.  I guess we will have to wait and find out!

We actually saw her opening and closing her mouth today--almost looked like a yawn but unfortunately I do not have a picture of that. 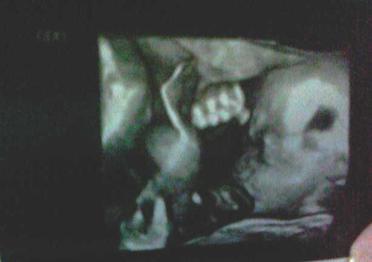 I have a feeling that Leighton is going to be our most mild-mannered and patient baby.  He is always the calmest of all of them.  He seems to tolerate things going on in there already.  His sisters have pushed his body back behind theirs.  I'm sure they were all running out of room anyway but its hard to get a good scan on him because of his position.  I'm curious to see how thier in-womb personality matches their out-of-womb personality!

Leighton is so far behind the other girls it was impossible to get a picture of him today.  Not sure we will be able to get any more shots of his face before he is born either.
Proudly powered by Weebly